Collecting an Oil Sample for Analysis

To obtain an accurate oil sample and avoid contamination, consider the following tips and techniques for collecting an oil sample. If instructions and/or guidelines are provided by the service provider, follow them attentively.

• Start and allow the engine to run for 2 to 3 minutes prior to collecting a sample. This allows the oil to mix so that any products that may have "settled" can be resuspended before collecting a sample. You can also collect a sample after taking the vehicle for a drive, but work cautiously around a hot engine. The oil does not have to be at operating temperature (or even warm) to collect a sample.

• When collecting a sample from oil that is being drained, collect your sample from the middle of the stream; don't collect the first bit of oil to drain because it may not accurately depict the overall composition of the engine oil.

• Always thoroughly clean your sampling equipment before storing and again prior to use. Because only a small quantity of oil is sampled, even a small amount of contamination can skew results.

The best location to obtain an oil sample for analysis is through the dipstick tube after running the engine for a short duration to ensure that the engine oil is thoroughly mixed. If engine oil is allowed to cool and settle for an extended period of time, contaminants in the oil may settle or temporary fall out of suspension. The resulting sample taken from engine oil that has been left undisturbed could therefore be tainted and the results would not accurately depict the condition of the engine oil in its entirety.

Before taking a sample (assuming engine is cold and has been sitting), start the engine and allow it to run for several minutes; it is not necessary to allow the engine to reach operating temperature, but the oil should be given time to circulate. Draw your sample through the dipstick tube using an appropriate apparatus, such as that pictured in the figure below, with the engine off. Do NOT attempt to take an oil sample with the engine running.

It is good practice to remove and measure the dipstick, then add approximately 12 inches to the collection hose; excessive hose can become tangle and be difficult to extract back out through the dipstick tube. Never reuse collection tubing, always discard it after a sample is collected and use a new section of tubing for subsequent sampling.

Once the drain plug is removed, you'll want to collect the sample in a clean receptacle to avoid cross-contamination (recommend a thoroughly cleaned quart mason jar). The sample should be taken from the middle of the drain cycle, i.e. do not collect the first oil to start draining when the plug is removed, and do not collect the last bit of oil to drain; fill the receptacle after the first 40 to 50% of oil has drained. You'll then need to transfer the oil from your receptacle to a sample collection container, preferably without spilling engine oil all over the sample container. Oil sample containers are provided by the oil analysis service provider and generally require 3 ounces to perform a thorough analysis.

Collecting an oil sample directly from the lube oil filter is not recommended. The concentration of wear particles and contaminants may be significantly higher in the oil filter than what is actually circulating through the engine.

We currently use and recommend Oil Analyzers, INC, but there are a number of laboratories in the U.S. that specialize in oil analysis services for motor oil, gear oil, transmission fluids, and even fuel. Their pre-paid kits are available here: Oil Analyzers test kit (pre-paid USPS shipping) or Oil Analyzers test kit (pre-paid UPS shipping). We recommend the UPS shipping option, since USPS has a tendency to challenge whether or not used motor oil constitutes a hazardous material. Note that the test kits are packaged in carrier approved packaging and are completely safe (and legal) to ship. Oil Analyzers has an extremely quick turnaround on test results and a well organized user interface. Sample results are available through email (PDF copies) and/or through their webpage. We typically receive our reports 1 to 2 business days after the sample is received by their lab. Furthermore, they report TBN (total base number) on their reports without any additional charge.

An analysis is fairly comprehensive (depending on the laboratory) and will identify a number of chemicals and metals found in your engine oil in addition to addressing the acceptable limits of said findings. They include, but are not limited to:

Wear metals, PPM - Wear metals include chromium, iron, and aluminum; materials that make up the various bearings, gears, pistons, camshaft, crankshaft, cylinder walls, and other moving parts of your engine that experience metal-on-metal contact. Values are typically given in PPM (parts per million).

Exhaust soot, % by volume - Like fuel dilution, exhaust soot enters the crankcase by means of blowby. Some exhaust soot in the engine oil is entirely normal, thus the reason oil rapidly turns black in diesel engines. Anything that creates black smoke out of the tailpipe (performance modifications, worn injectors, etc) contributes to oil contamination. Values are typically given in percent by volume (volume of exhaust soot relative to volume of engine oil). Exhaust soot tends to be relatively abrasive and accelerates engine wear.

Water, % by volume - Water/engine coolant in the engine oil is the result of a failed seal, o-ring(s), water pump, head gasket, oil cooler, or EGR cooler. Values are typically given in percent by volume (volume of water/coolant relative to volume of engine oil).

Viscosity, Oxidation, & Nitration - This identifies the current viscosity of the engine oil, the degree of contamination, and the level of oil contamination/breakdown.

We never recommend extending OEM defined oil change intervals, regardless of the type/brand of oil used. However, using a professional oil analysis service is theoretically an appropriate technique for making adjustments to oil change intervals, whether that translates into shortening or lengthening them. Oil analysis services are employed in certain industries to gauge equipment condition as well as indicate an appropriate service interval. In certain instances, service costs can be reduced by relying on this method. 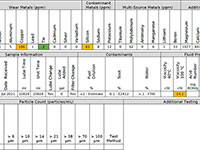 • Oil was sampled in this new Ram 2500 at its first oil change to serve as a baseline and verify appropriate oil change intervals. Note the elevated concentration of wear metals resulting from the initial engine break-in. Although this should not cause concern, a subsequent sample will be submitted for analysis at the next oil change to monitor these conditions.

• Oil is routinely sampled on this vehicle, generally every 2 to 3 oil changes, as a preventive care measure. Fuel dilution was relatively high in this sample, which prompted an inspection of the fuel system. A leaking fuel injector was determined to be the cause. Without this oil analysis, the problem would have persisted and the engine may have eventually been severely damaged. 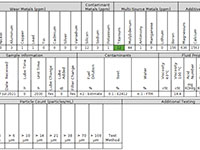 • Engine oil was sampled to create a baseline for future samples. The new owner of this machine has no maintenance history and will be able to monitor for possible mechanical problems in the future. These Deutz diesels are oil cooled (air-to-oil heat exchanger) and thus the lube oil is subjected to severe conditions, particularly during the hot summers when it sees the most use. We'll be monitoring the possibly elevated levels of wear metals in future sample submissions. 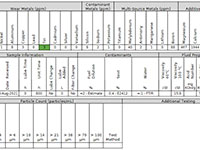 • Oil was sampled because it was obvious that routine maintenance was not being performed. Additionally, the cooling system had run dry and the owner had no idea how long this condition had persisted, only that the machine was running poorly (because it was overheating). Surprisingly, the oil condition was not nearly as bad as anticipated. Although wear metals were slightly elevated, fuel dilution and combustion byproducts were at low [normal] levels and there were no traces of engine coolant in the oil supply. 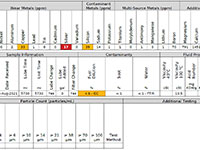 • The engine oil was sampled to monitor wear metals due to engine break-in and the rate of fuel dilution. The 6.7L Power Stroke continues to utilize a post-injection process for regeneration (as opposed to the "9th" injector technique), thus we'll be closely monitoring fuel dilution to create a summer and winter baseline. Although this vehicle is equipped with an oil life monitor system, we prefer to set oil change intervals the old fashioned way to maximize engine protection.

Diesel Oil Guide - Cummins, Power Stroke, & Duramax Viscosity Guide, Intervals, & Oil Capacity
Fuel Dilution in Diesel Engines Explained
When and why you should use a diesel fuel additive
10 Must Have Aftermarket Upgrades for Towing