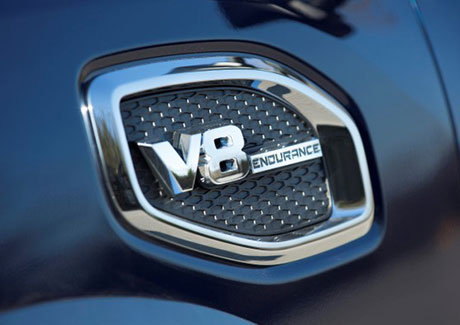 The Nissan Titan XD is becoming somewhat of a novelty - not because it's not a cool concept, not because its performance is subpar, and not because people don't like the idea of a half ton pickup powered by 300+ cubic inches of raw power from Cummins, the renowned diesel engine manufacturer. Then again, the term "half ton" just might be a significant part of the problem. Technically speaking, the Nissan Titan XD, unlike the standard Nissan Titan, is not a 1/2 ton pickup; but it doesn't quite fit into the 3/4 ton category either. Keeping in mind that 1/2 ton and 3/4 ton are, for all intents and purposes, arbitrary terms with no direct relationship to a truck's physical capabilities, the Nissan Titan XD is in a league of its own. While it seems like a pickup that may bridge the gap between two quintessential categories would be widely popular, it hasn't been.

The big question is whether or not a gasoline powered powertrain will revive the struggling XD platform. While it features up to the same gross vehicle wait rating (GVWR), the 5.6L V-8 powered XD loses some serious weight - the heaviest gas powered XD, according to Nissan, weighs in just 60 lbs heavier than the lightest diesel powered XD.

The updated 5.6L V-8 is impressive; 11.2 to 1 compression on regular 87 octane fuel thanks to a direct injection fuel system helps push the package to nearly 400 horsepower and just north of 400 lb-ft of torque. Horsepower and torque are produced on a high note, but that's not untypical for a gasoline engine. Those figures place the 5.6L powered XD in the middle of the pack when compared to competing 1/2 tons and picking up the rear of available gas powered 3/4 tons (although not necessarily coming in dead last).

Impressive is the 5.6L V-8 powered XD's 7 speed automatic transmission, which features a deep 1st gear reduction and comfortable steps between sequential upshifts. The second overdrive is slightly on the short side at 0.78 to 1, but it looks like Nissan has compensated with a tall 3.36 to 1 axle ratio - with a 4.89 first gear ratio, you'll never know that this truck's rear end is stuffed with highway gears. When compared to the Cummins powered XD, the 5.6L version's revs at 55 mph are only 90 rpm higher.

The 5.6L powered Titan XD may be preferred to the Cummins powered variation do to its greater payload, and it manages to maintain reasonable conventional and gooseneck tow ratings. 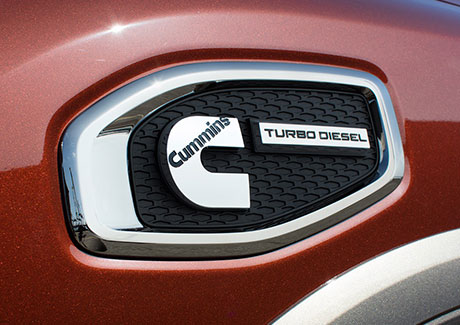 Fun to drive? Sure. Practical? Why not. Conversation piece? Of course, it's powered by a 310 horsepower Cummins turbodiesel. But imagine the same powertrain in a pickup platform that is a little more realistic; and a little less like boat anchor.

The biggest problem that the Nissan Titan XD faces is its size - it's a monstrosity. Not in terms of physical dimensions, but it's curb weight tips the scales into 3/4 ton diesel pickup territory. Meanwhile, it's capabilities fail to outshine even 1/2 ton competitors, save for taking the title for maximum tow by a measly 114 lbs (12,314 lbs for the 2016 Nissan Titan XD, 12,200 lbs for a properly equipped Ford F-150). To truly shine, the platform needs to edge out 1/2 ton competitors and fall somewhere behind the 3/4 tons...but it doesn't.

The advantageous aspect of the XD's size is that, do its high GVWR, the EPA does not rate fuel economy and therefore Nissan does not need to publish it. To be fair, the Cummins is reportedly good on fuel, particularly while towing, and who would expect any less. However, the XD doesn't come close to Ram's 29 mpg EcoDiesel. Even though the two trucks were designed for very different purposes, the EcoDiesel is still rated to tow up to 9,200 lbs for 2016 - that's quite a load for a 182 cubic inch fuel sipper.

Either the XD is a greatly guarded secret, or potential truck buyers aren't sold on the package. It doesn't help the the XD comes with a hefty price tag - a loaded XD enters the $60,000 range rather quickly for those who want all the amenities and upgrades. At that price. why not step up to a true 3/4 ton and acquire more capability in the process? We assume that's the dilemma people are facing. One thing can be said for certain - the Cummins under the hood is certainly not the problem.