The following procedures are based on a 6.5L turbocharged engine. The steps are identical for 6.2L and naturally aspirated 6.5L engines, however there are subtle differences (such as the absence of a wastegate solenoid). 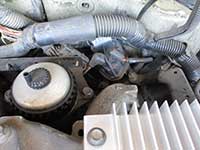 • Locate the glow plug controller on the driver side, rear of the engine. It is mounted to the right of and behind the fuel filter housing on a bracket near the firewall. 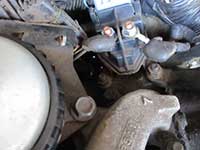 • Remove the positive input and output terminals with a 13 mm socket.

• Gently remove the wastegate solenoid bracket from the mounting studs and push it aside without putting any strain on the lines/harness. 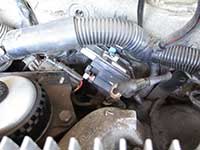 • Lift the glow plug controller off of the mounting studs and carefully rotate it until the connector release is accessible. Do not put any strain on the connector wires/harness. 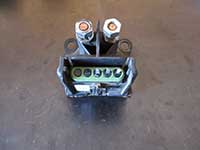 • Install the glow plug controller in reverse. Use dielectric grease on the connector pins and input/output lugs.