A glow plug is nothing more than a resistor. When electrical current is applied to the glow plug the tip rapidly heats, consequently heating the combustion chamber in order to produce the heat necessary to start the engine. With the exception of the glow plug's post-heating cycle, the glow plug system is only used a starting aid and the system is turned off while the engine is running.

The post-heating or post-start heating cycle should occur in cold weather in order to maintain complete combustion until there is ample heat to allow the engine to run smoothly. When this post-start sequence is activated, you will see the wait-to-start (WTS) light illuminate rapidly/frequently in short 1 to 2 second bursts.

A brand new glow plug should read 0.8 Ω of resistance between the spade connector and engine block (make sure you have a good ground or you will get a faulty reading). However, any reading between 0.8 to 1.8 Ω is considered normal for a fully functioning glow plug. As a rule of thumb, the greater the resistance measured through the glow plug, the more "worn" it is. If you're having cold start issues, testing the resistance of each glow plug is a good starting point.

For all intents and purposes, 8 glow plugs do not fail at once. If you have a starting problem that is not isolated to one or a few individual glow plugs, test the glow plug controller. If the glow plugs rapidly cycle on-and-off or if there is audible relay "chatter" during the pre-heat cycle, the glow plug controller should be replaced. White smoke while cranking signals that the engine is getting fuel but the fuel is not combusting. This is typically a glow plug system related problem as there is not enough heat in the combustion chamber to initiate autoignition. A small amount of white smoke while cranking in cold weather is not uncommon, however if it persists once the engine is running there is a glow plug or glow plug controller related issue; the system should be using a post-heating cycle to eliminate this condition. Likewise, there should be no white smoke while cranking in warm weather and this indicates a glow plug related problem.

It is recommended that all 6.5L GM/Detroit diesels started in weather lower than 32 °F use a block heater. The concern is not necessarily that the engine will be hard to start, but excessive wear will occur under such conditions do to the material properties of engine oil below this temperature range. Always use a block heater in cold weather, it's there for a reason.

The cylinder 4 and 6 glow plugs (passenger side) feature heat shields as they are in the vicinity of the turbocharger and located in an area of the exhaust manifold where heat cannot easily dissipate. In order to aid in service and allow the heat shields to be removed, the harness at these cylinders uses special extension wires that are disconnected from the main glow plug wiring harness prior to removal of the heat shields. The terminals at the glow plug often become extremely brittle and you are highly likely to break at least one. If you do not, you're one of the lucky few. The correct replacement part is REID TEKK RT-250701 (referred to as glow plug harness extension or glow plug wire extension). • Remove the passenger side battery tray. 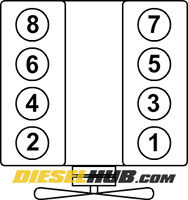 • Cylinders 1, 3, 5, and 7 are located on the driver side of the engine while cylinders 2, 4, 6, and 8 are located on the passenger side. A 10 mm deep socket is required to remove the glow plugs. A single wire spade connector is attached to the tip of each glow plug.

• All passenger side glow plugs are located to the left (towards the cab) of that cylinder's respective exhaust manifold runner.

• All driver side glow plugs are located to the right (towards the radiator) of that cylinder's respective exhaust manifold runner.

• Glow plugs are installed in the reverse order they are removed. Lightly coat the threads of each new glow plug in high heat anti-seize before installing. This will act as a lubricant to help prevent cross-threading as well as make future replacement less challenging. ACDelco 10-4039 is a quality nickel based compound for all applications. Glow plugs should be tightened down "snug"; do not overtighten. • The cylinder 2 glow plug is easy to access and straight forward. Carefully remove the connector, then remove the glow plug. We used a 5 inch extension, which places your hands far enough outwards to avoid busting a knuckle. • The cylinder 4 and 6 glow plugs both have heat shields protecting the glow plug harness. They are also the only "serviceable" harnesses as the female spade connectors at the glow plug frequently become damaged during removal.

• Disconnect the harness connectors (not at the glow plug) then remove the heat shields using a 15 mm socket (refer to image for clarification).

• Do not attempt to remove the spade connector from the glow plug before removing the heat shield; it will likely break. • Pull the heat shield down towards the harness extension connector, then you can reach the spade connector at the glow plug.

• Once again, we used a 5 inch extension for the cylinder 4 glow plug. • A 5 inch extension and 1/4" drive swivel joint was used for the cylinder 6 glow plug. The turbocharger downpipe does not need to be removed to access any of the cylinders, there is ample room.

• If you break the cylinder 4 or 6 harness connector, see the information provided in the introduction above. If you don't manage to break a terminal, you're one of the lucky few; they tend to disintegrate. • The cylinder 8 glow plug is also accessible using a 5 inch extension and a 1/4" drive swivel joint. There's plenty of room to work around the turbocharger downpipe this way.

• Reinstall the inner fender, battery tray, etc once the passenger side glow plugs have been replaced. • The driver side glow plugs are relatively straight forward and nothing needs to be removed to access them. A 10 mm, 1/4" drive deep socket with no extension can be used with ease.

• Once the driver side glow plugs have been replaced, reinstall the negative battery cables and test for proper glow plug operation. • You should be using factory ACDelco 60G replacement glow plugs. Of the 8 glow plugs removed from this engine, all the original ACDelco plugs are in relatively good condition. However, if you look closely you'll notice a few of the plugs have distorted tips. Aftermarket glow plugs have a tendency to swell overtime and this is potentially harmful to your engine should one fail. Stick with OEM quality.