[1] Black and gray PMDs are not interchangeable; must use what originally came with vehicle.
[2] Extension harnesses are for black PMD only.

The PMD/FSD is a type of signal intensifier - the engine PCM sends a signal to the PMD which is then amplified by a pair of 500 Watt transistors. This amplified signal then acts as a driver for the fuel solenoid, triggering injection events as they are commanded. The PMD is mounted to the driver side of the Stanadyne DS-4 injection pump centered in the valley at the front of the engine. By design, the flow of diesel fuel through the injection pump is intended to cool the PMD, which produces and must dissipate a significant amount of heat. Using fuel flow as a cooling medium is believed to be effective under moderate conditions, but fails to provide sufficient cooling in relatively high ambient temperatures. It also does not address the heat soak effect experienced when an engine at operating temperature is shut down. The repeated heating and cooling cycles experienced by the PMD and its inability to dissipate heat in certain conditions is generally accepted as the leading cause of PMD failures. The duty cycle of the PMD increases with engine RPM; the occurrence of injection events with respect to time increases with engine speed and thus the PMD will receive and amplify signals from the PCM at a greater rate.

Replacement of the PMD requires removal of the entire intake manifold, a somewhat burdensome task to simply reach the module's 4 mounting bolts and single electrical connection. A highly recommended solution is to ditch the original PMD altogether, replacing and relocating it to a more suitable (and accessible) location. For those who want to go a step further, the aftermarket produces various options that both relocate and add a heat sink to the PMD. One such kit is being used in the procedures below. It's worth noting the location we've chosen for our PMD is somewhat controversial as the PMD remains in a relatively hot environment atop the engine. We've chosen this position solely based on the fact that the manufacturer provides a lifetime warranty on the PMD when using their mounting/heat sink system. Additional relocation options include mounting the PMD near the battery box, firewall, or even behind the front bumper. There are many options and solutions available - we recommend you do your own independent research before relocating the PMD. Each option has its inherent combination of advantages and disadvantages.

GM experienced widespread PMD failures, leading them to warranty the injection pump on the 6.5L diesel for 100,000 miles in order to maintain the support (and business) of their patrons. The factory GM PMD's are black in color, while an "upgraded" gray unit was later released by Stanadyne. However, the Stanadyne units do not work with the factory GM harness connector and an adapter is therefore required. If replacing the PMD, make sure that the calibration resistor is installed (you will not be able to reuse the old one).

Symptoms of a failing PMD include, but are not limited to: hard starting/excessive cranking to start an engine, engine stalling, engine misfires, and ultimately a no start condition when the PMD has failed altogether. An engine that will not restart after being shutdown at operating temperature but will restart after it has had time to cool is an extremely common sign that a PMD is failing and should be replaced. Engine misfires have been known to be caused by a failing PMD, however this is somewhat rare and a misfire condition is often due to other fuel system related problems, including a faulty lift pump of oil pressure sensor (on 95+ engines, the electrical load for the lift pump is carried through the oil pressure sensor).

Diagnosing a PMD is an art as much as it is a science; if you're experiencing any of the aforementioned problems and the PMD has not been relocated, replacing and relocating it is a wise investment. If it does not alleviate driveability issues, you have, at the very least, reduced or eliminated PMD concerns for the foreseeable future. For misfire related problems, a complete fuel system diagnosis is recommended before replacing the PMD - this should include fuel injectors, the fuel filter, the lift pump, and the oil pressure sensor (on applicable model years). Bucking/jerking under load often points to a lift pump and/or oil pressure sensor failure and not a PMD related issue. 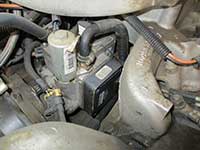 • Locate the PMD/FSD on the driver side of the injection pump, which is mounted toward the front of the engine in the valley between the intake manifold runners. 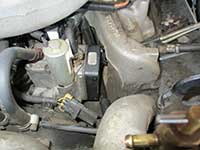 • Disconnect the PMD/FSD connector - it is located at the rear of the PMD (towards the cab). The connector retaining clip is accessible by using a long flathead screwdriver to release the clip, and a second screwdriver (or long nimble fingers) to pull the connector towards the firewall. Do not tug or place strain on the wires in order to remove the connector. 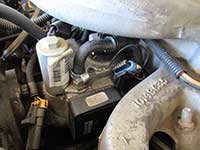 • Maneuver the connector upwards. A section of solid core electrical wire bent into a hook works well to grab the connector.

• Disconnect the FSD/PMD ground wire using a T25 Torx bit. It's a tight fit, but a 1/4" drive bit and ratchet can reach the bolt after pushing the fuel line aside gently.

• Attempt to pull the connector and wiring pigtail outwards; if the wires do not budge, you will need an extension pigtail. If you are able to free 4"-6" of slack, you should be able to reach the relocated PMD (if relocating to the same position as us). It is hit-or-miss whether or not you'll need an extension pigtail; often, the harness connector gets hung on one of the injector lines. An 8" extension is all that is necessary if you are unable to pull the harness outwards. Note - if using an extension, do not remove the ground wire - simply leave it attached to the injection pump.

• Install the relocated PMD/FSD. In our case, the PMD and heat sink mount to the upper intake plenum. Removing the intake plenum bolts requires a 10mm socket.

• If you're NOT using an extension pigtail (i.e. using the factory connector because you were able to obtain enough slack) attach the PMD ground wire to the heat sink. 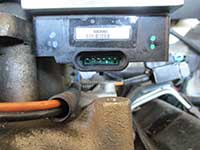 • Install the PMD harness connector to the PMD or install the extension pigtail between the PMD and factory PMD harness.