[1] Fuel pumps are cross-compatible between model years. EP309 for 1994+ model years has been found to be more reliable than the 1992-1993 lift pumps and operates at a slightly higher pressure; recommend as a replacement on early models.
[2] Replacement fuel connector pigtail, attaches to fuel pump itself; male connector shroud with female terminals.
[3] Replacement fuel pump harness connector; female connector shroud with male terminals.
[4] Replace as required; more common failure point that fuel pump itself.

Symptoms of a weak or failed fuel pump include:

When replacing the lift pump, consider the fact that many owners find the 1992 to 1993 model year lift pumps to outlast and outperform the later pump (rumor has it that it runs at a slightly higher rated pressure). The lift pumps are cross compatible between the model years - connector and fittings are identical. 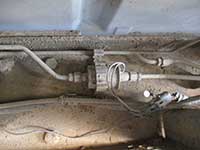 • The lift pump is located horizontally inside the frame rail on the driver side of the vehicle, roughly halfway between the engine compartment and fuel tank (exact lateral position will vary based on truck configuration/wheelbase).

• Place a suitable drain pan on the ground beneath the lift pump and rest a shop towel/rag on the inner frame rail below the pump. It is highly recommended that latex gloves are worn during these procedures. 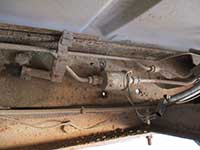 • Unplug the lift pump electrical connector and position it aside.

• Remove the (2) bolts securing the lift pump bracket in place with a 13mm socket. Disconnect the electrical harness and return fuel lines from the bracket, then slide the bracket towards the rear of the vehicle off of the lift pump.

• Loosen, but do not remove completely the compression fittings at the pump inlet/outlet. If you loosen the fittings to the point that fuel begins to leak, you've loosened it too much. The goal is to loosen the fittings such that they can be removed by hand in subsequent steps. 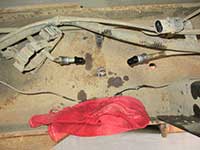 •The trick to replacing the lift pump without taking a bath in diesel fuel is to use generic, flexible vacuum line caps with roughly a 3/8" I.D. They are available at any auto parts store for a few dollars and can be used to plug the fuel lines while you are both removing and installing the lift pumps. The alternative requires impeccable speed and coordination to quickly remove the old and install the new pump; it also tends to result in an oily mess.

• Once the outlet fitting is plugged, remove the lift pump from the fuel inlet line, then plug the line with a finger until you are able to cap the line in the same fashion as the previous step. 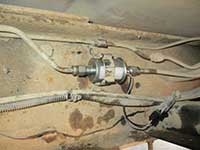 • Install the replacement lift pump in the opposite fashion by removing the vacuum cap and tightening down the compression fitting. I prefer to install the pump at the inlet first, followed by the outlet. However, it is not imperative which side is installed/removed first and the outcome will be the same regardless - I just find that maneuvering the outlet line is easier without the pump installed on it, so I install the pump on the inlet first.

The lift pump is directional and labeled at the outlet; do not install backwards.

• Securely tighten the inlet and outlet fittings, then reinstall the lift pump/return line bracket and reconnect the electrical connector.

• Performed correctly, the drain pan will have seemed irrelevant and you're rag should be merely damp with diesel fuel. If you're covered in diesel fuel and have succeeded in creating an oily mess, don't be discouraged - some things get easier with experience, and that's why we recommend placing a drain pan beneath the pump!

• Replace the fuel pump chassis harness connector if it is damaged, fits loosely, or is otherwise compromised. 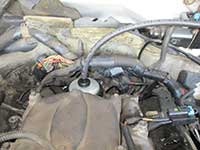