Do not be alarmed if the armature that drives the fuel pump is a different design than the OEM pump. Pictured below is the OEM Ford/International pump and the correct Carter brand replacement. The armature is the same length on both pumps, however their designs differ. With both pump designs it is imperative that the tip of the armature be installed beneath the lobe on the camshaft.

• Remove the inner fender on the passenger side (optional, but vastly increases accessibly). 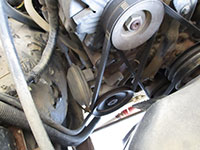 • Remove the vacuum pump (mounted below the alternator on the front of the engine block). It is held in place by (2) bolts requiring a 10 mm socket and has a single hose that must be removed and set aside. 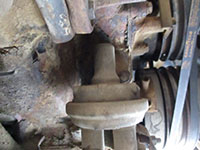 • Remove the (2) bolts securing the fuel pump to the engine block using a 9/16" socket, then pull the pump away from the engine block to remove. The arm of the fuel pump may be under tension depending on the position of the camshaft lobe, so don't be alarmed if it begins to tilt or remains tight until both bolts are completely removed. 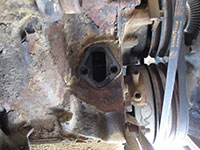 • Carefully plug the hole through the engine block with a lint free rag and remove all gasket material from the engine block. A perfectly clean mounting surface is desired to ensure that the new fuel pump seals completely. 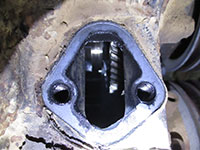 • Next, you'll need to locate the fuel pump camshaft lobe into the correct position so that the new fuel pump can be installed. The armature of the fuel pump must be inserted below the cam lobe. If installed incorrectly, damage will occur to the fuel pump and parts of the pump may end up in the crankcase when it fails.

• While using a flashlight, look through the hole in the engine block and locate the camshaft. The camshaft lobe that drives the fuel pump will be straight through the hole in the block that the pump mounts through. Note the position of the camshaft lobe and "bump" the engine over using a remote starter until the peak (tallest part) of the lobe points upwards. It may take several attempts to line up the cam lobe properly. Disconnect the negative battery cables once again after the camshaft has been positioned properly.

Note - Do not use the ignition key to turn the engine over during this process, a remote starter must be used. If you do not have experience in performing this task, seek the help of a professional. 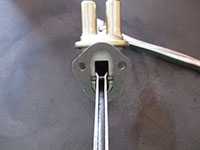 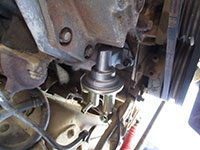 • When installing the fuel pump, the armature must be positioned beneath the camshaft lobe. Point the fuel pump armature downwards while sliding it into the engine block, then tilt the pump into position and install the (2) bolts to secure it to the block. Depending on the orientation of the camshaft lobe, you may need to overcome some spring tension when tightening the bolts down. A torque wrench will not fit near the fuel pump hardware; snug the bolts up moderately.

• Install the low pressure and high pressure fuel lines, ensuring that the clamp and flare nut are both tight.

• Crank the engine over for 10 seconds, followed by a 30 second cool down if the engine does not start. Repeat until engine starts. If the fuel system does not self prime recheck tightness of fuel lines at the pump.

• With engine running, check for leaks at the fuel pump and around the fuel filter housing.