When an injector becomes worn a number of symptoms can arise, which includes poor fuel economy, poor performance, excessive smoke under load, hard starting, rough idle, and related driveability concerns. Additionally, a worn injector can leak fuel into the cylinder while it sits, washing the cylinder and resulting in a dry start on that cylinder. For these reasons, injectors should be replaced as soon as it is suspected that they are worn. It is best to replace all 8 injectors at once and since the price of a set of injectors is reasonable on these engines, there's no reason not to. Identifying a single injector as the culprit is near impossible without removing the injectors and having them bench tested by a qualified shop. Furthermore, if a single injector fails you can expect that the remainder of the injectors are not far behind.

In order to promote injector and injection pump longevity, a fuel additive should be used at every fill-up on all IDI diesels. These engines were engineered long before the ULSD (ultra low sulfur diesel) mandate in the U.S. and were designed to run on LSD (low sulfur diesel). Sulfur plays a pivotal role in the lubrication properties of diesel fuel and thus ULSD does not provide sufficient lubricity to maximize the service life of injectors and the injection pump. We highly recommend Opti-Lube XDP or Archoil AR6200 diesel fuel additives. Both additives have earned high remarks and the cost-per-fill-up is more than reasonable.

A and AA injectors were produced to identical specifications by two separate manufacturers. Similarly, B, BB, and D code injectors are built to the same specifications, but by different manufacturers (see chart above). A and AA injector codes, only used for one model year, have long been retired. B/BB/D code injectors feature an increased nozzle flow volume. Interestingly, B/BB/D series injectors have a lower ~1,875 psi opening pressure than the A/AA injector's ~2,075 psi opening pressure.

The fuel return system recycles excess fuel delivered to the injection pump and fuel injectors back to the fuel tank. In lieu of such a system, pressurized fuel from both the low pressure and high pressure fuel pumps would have no path and one or more parts of the fuel system would fail under pressure. It's rare for the return system to plug or develop a restriction, however the hoses and injector caps/headers have a tendency to leak with age. Thus, replacing the return lines and/or servicing as required is extremely important anytime the system is touched. Never replace fuel injectors without replacing the return line headers (caps), hoses, and related o-rings.

The routing of the return fuel hoses is different for naturally aspirated and turbocharged engines, however the operation of the system is the same and replacing the various parts is largely intuitive; simply trace the system and replace it one piece at a time as you move from cylinder to cylinder. The components are also extremely inexpensive, thus there is no reason to take shortcuts.

There are two injector return cap styles, referred to simple as the "early" and "late" style. The two styles are not directly interchangeable, however an early style return system can be retrofitted to the late style. While there's some debate surrounding the topic, the consensus is that there is little reason to convert one system to the other. The late style injector return cap was introduced during the 1989 model year to address concerns with fuel leaks. Early style return systems utilize a 3/16" hose while late style return systems feature 1/4" fuel hoses. The two styles are easily distinguishable and you can visually ensure that you are getting the correct parts for your application. The figure below will help you distinguish the early and late injector caps.

How to Remove/Replace Fuel Injectors on a 6.9L or 7.3L IDI Diesel 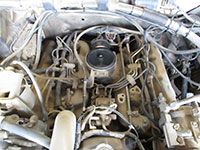 • Disconnect both negative battery cables so that the vehicle cannot be started unintentionally.

• Remove the air cleaner assembly and cover the intake manifold opening with a clean rag/towel.

• Use a vacuum or air nozzle to clean any debris (dirt, dust, grime) from the area around each fuel injector to prevent it from falling into the cylinder when the injectors are removed. 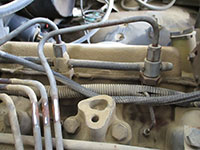 • Disconnect (or cut) the rubber fuel hose for each injector return line. Fuel return system hoses and headers should not reused - always replace when the injectors are removed. 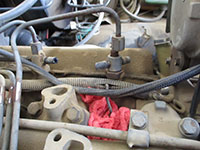 • Loosen, then fully remove the injector line from each fuel injector using a 16 mm flare nut wrench. Be extremely cautious not to kink any of the steel injector lines while handling them. You may wish to place a shop rag around the glow plug to collect any fuel that may leak when the injector line is removed. 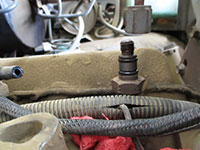 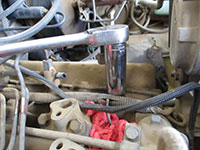 • Remove each fuel injector with a 1 inch deep socket.

• Ensure that the copper crush washer came out with the fuel injector (at the base of the injector nozzle assembly). If it did not, you will need to fish it out of the injector bore with a pick or small screwdriver.

• Clean the inside of the injector bore in the cylinder head using a shop vacuum. We typically reduce the size of the vacuum hose using heater hoses of various sizes and plenty of duct tape. Do not blow the bores with shop air; remove debris using a vacuum. 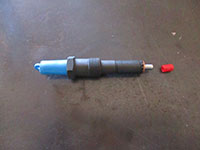 • Remove the protective cap from the nozzle of the new injector and install the copper crush washer. A small amount of anti-seize lubricant can be applied to one side of the copper washer in order to help it stick to the base of the injector nozzle during installation. 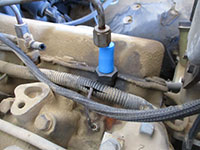 • Install the new fuel injector while ensuring that the copper crush washer remains secured to the base of the injector, i.e. does not fall into the cylinder head bore before being set into position. Always start the injector threads by hand, then torque to 35 ft-lbs.

Do not remove the protective cap at the top of the injector at this time. Repeat installation procedures for all 8 injectors. 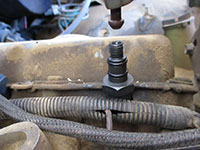 • Using a clean rag, clean the tip (flared end) of each injector line.

• Coat the injector return header o-rings (2 per injector) in clean engine oil, then install on each injector (reference image for proper position of the o-rings). Use caution as not to damage the injector o-ring on the sharp edge(s) of the threads and o-ring lands.

• Install each injector fuel return header after removing the protective cap from the top of the injector. Rotate the header left-to-right while pressuring downwards firmly until it seats completely.

Note that the fuel return headers are not all identical; 90 degree headers are used to cross from the left and right banks while a single nozzle header is used where the return system stops. 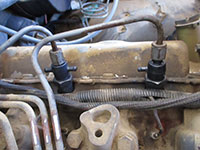 • Install the fuel lines (high pressure steel lines) onto the new injectors. Always start the threads by hand, then snug up with a flare nut wrench. 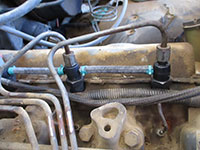 • Cut new fuel return lines to length and reassemble the return fuel system using the hose and clamps supplied in the service kit.

• Crank the engine in 10 second cycles, allowing the starter to cool for 30 seconds between cycles. Check for fuel leaks between cranking cycles. It may take several attempts before the fuel system primes and the engine runs. The engine can be expected to run very rough until all air is worked out of the fuel system.