5.9L Cummins that experience a "dead pedal" condition (unresponsive accelerator pedal or lagging responsiveness from the accelerator pedal) most likely have a faulty Accelerator Pedal Position Sensor, or APPS. This is often incorrectly labeled as a Throttle Position Sensor or TPS by parts catalogs and code readers, thus APPS and TPS can be used synonomously for practical purposes. A faulty APPS will generally, but not always set a DTC or series of DTCs that may include P0120, P0121, P0122, P0123, P0124, P0125, P0222, P0223, and P2121. In addition to an unresponsive accelerator pedal, symptoms may include engine surging (bucking) and delayed response. 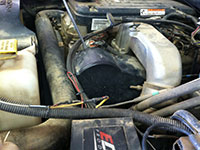 • Locate the APPS cover on the front, right of the cylinder head; remove the black cover to expose the sensor. 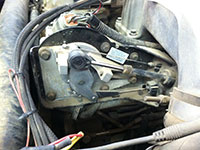 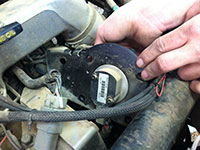 • The APPS is attached to the back of the bellcrank assembly. Unplug the electrical connector then remove the sensor from the bellcrank using a T20 Torx driver. The screws are coated in threadlocker and may be difficult to budge - take care not to strip the head.

• With the old sensor removed, install the new APPS. Notice the the slot on the APPS must engage the tang on the bellcrank shaft. Make sure to line up the slot into the tang when installing. If the APPS does not mount flush with the surface, the slot is not installed into the tang properly. When the slot/tang are engaged properly, you'll have to rotate the APPS clockwise to line up the mounting holes.

•The mounting holes on the APPS are slotted so that it may be calibrated, however you'll want to rotate the sensor clockwise as much as possible before tightening. 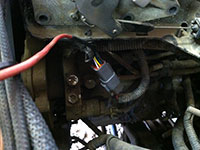 • Reconnect the sensor connector, then remount the bellcrank assembly.

• Using a digital multimeter, carefully back-probe pin #3 (green wire) of the APPS connector with the positive lead. Connect the negative lead to the negative battery terminal; do not attempt to find a "good ground" elsewhere, an accurate reading is desirable. 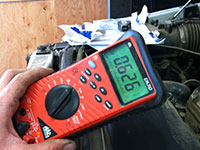 • Set the multimeter/voltmeter on a low range, DC voltage setting.

• Start the truck and measure the APPS voltage at idle. Verify that the sensor voltage is between 0.580 and 0.670 at idle.

With your meter on low voltage DC, start the truck. At idle, the voltage should read between 0.580 - 0.670. Locate the idle stop screw and turn it clockwise until you see voltage begin to rise, then back it off half a turn.

• Disconnect the volt/multimeter and reinstall the APPS cover. 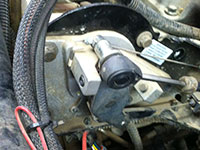 • Locate the idle adjustment screw (marked in image at left). Turn the screw clockwise until the voltage begins to rise, then back the screw out one-half (1/2) turn counterclockwise.