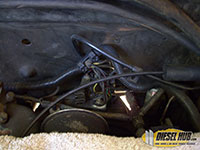 • Disconnect the negative battery cables from both batteries.

• Disconnect the connector for the wait-to-start light (blue wire) and remove the bolt that grounds the controller to the engine block. 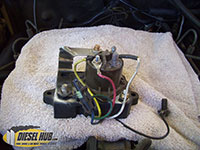 • Remove the nuts from the terminals on the glow plug relay for the two large yellow wires and small red wire that connect to the electrical harness.

• Remove the nut from the stud at the tip of the busbar and then the two brown wires that lead to the glow plug harness.

• Extract the glow plug controller by removing the two bolts that attach it to the intake manifold. 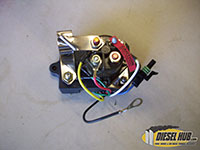 • If you are just replacing the relay, remove the remaining wires after you have written down or marked the terminals in which they belong, then replace the old relay with your new one, double checking that all wires are hooked up properly (see diagram below if in doubt).

• If you are replacing the entire controller, install it in the reverse manner that the old was removed. 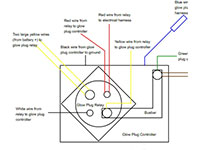 • Do not rely on this diagram alone - in the event that the truck has been worked on previously, some wires may have been replaced with different colored ones. Make your own diagram, and use this one as a reference to that.