A glow plug is simply a heating element that heats air in the combustion chamber to provide the heat necessary for combustion to occur. Without the aid of glow plugs the engine must rely on the heat produced by compression alone, which may or may not be sufficient depending on the ambient air temperature; a lot of it also has to do with cranking speed. The system typically cycles for 7 to 10 seconds and may cycle intermittently while the engine is running after a cold start. If your IDI is hard to start or your glow plug relay and/or controller is malfunctioning, the glow plugs may be to blame.

When a glow plug "burns out" (malfunctions), its electrical resistance will be significantly increased. One way of checking the glow plugs is to perform a resistance test using a digital multimeter (positive lead at top of glow plug, negative lead at base). It is suggested that anything below 3 ohms of resistance is normal. However, we prefer to compare the resistance in each individual glow plug, a methodological approach that, through process of elimination, easily determines which glow plug(s) is/are not behaving like the rest. For instance, 7 of our glow plugs showed 0.3 ohms of resistance, and 1 showed 0.7 ohms of resistance. While this is still within the acceptable range, it told us that at least 1 glow plug was not performing at the same level as the rest. Never change out a single glow plug; if 1 needs to be replaced, replace all 8. Additionally, only use top quality Motorcraft brand glow plugs in your 6.9/7.3 IDI. Non-OEM brands have been linked to poor performance, short life, and a higher risk of the heating element breaking off in the engine. 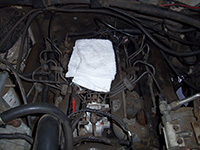 • Begin by disconnecting both negative battery cables so the system can not be activated. This is good practice anytime you are working on a vehicle's electrical system.

• Remove the air cleaner assembly and place a rag over the intake to protect it from debris and foreign objects. 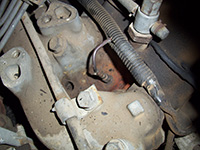 • The glow plugs are located between (or behind for the rearmost plug) the intake runners and have a brown wire connected to them via a bullet connector for the 7.3L IDI and a spade connector for the 6.9L IDI.

• Remove the connector from each of the 8 glow plugs; they just pull off.

• Use compressed air to blow any debris away from the glow plug, as once the glow plug is removed these foreign objects will have a direct path into the combustion chamber. 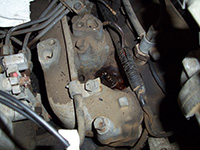 • With the connector removed, spray the base of each glow plug liberally with your preferred penetrating lubricant (WD-40, PB Blaster, etc) and allow it to set for approximately 5 minutes; this will help free any seized threads.

• Use a 3/8" deep socket to loosen and remove the glow plug from the cylinder head.

• Here's a close up of the area you'll be working in with the old glow plug removed and the new one installed. 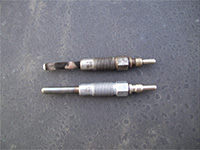 • Old glow plug vs new glow plug. It is highly recommended that you only use Motorcraft brand glow plugs (Motorcraft ZD1A for the 6.9L, ZD9 for the 7.3L), clearly identifiable by the markings "Beru, Germany" and "Motorcraft". Many alternatives to the OEM glow plugs have been known to display a short life and may be at a higher risk of the heating element tip breaking off and/or swelling in the chamber.