What are synthetic oils?

Synthetic engine and gear oils are artificially made, or "synthesized" from naturally occurring materials, while conventional engine oils are refined from crude oil mined from the Earth. Synthetic oil's chemical and mechanical properties have proven to be far superior than those of conventional motor oils.

• Shear, breakdown of the oils molecules due to repetitive mechanical forces and extreme pressures. Shear is of particular importance in engines with HEUI injection systems, where engine oil must resist intense pressures. However, protection against shear is not limited to engines with these injection types (7.3L/6.0L Power Stroke, many International & Caterpillar engines).

• Thermal breakdown, referring to a change in chemical composition over time resulting from exposure to high temperatures. The most severe example of thermal breakdown would be the burning of engine oil. Synthetic oil is also more resistant to "cooking" in a turbocharger's bearings after an engine is shutdown. This not only contributes to increased engine oil life, but also adds a layer of protection to the bearings within the turbocharger.

• Chemical breakdown, particularly when fuel dilution is present. Synthetic motor oils are more resilient to chemical breakdown, and therefore contamination from fuel dilution as well as soot (a partially burned hydrocarbon) is of less concern. Both fuel dilution and the accumulation of soot in the engine oil supply are unavoidable attributes of diesel engines - their concentration can be reduced, but the phenomenon cannot be eliminated entirely. This is of particular concern for modern diesels equipped with emission reducing devices.

Simply put, synthetic motor oils are far superior to conventional "dino" oils. The greatest downfall is the price; synthetic lubricants are typically more expensive. Amsoil is a leading manufacturer of synthetic lubricants, including engine oil specifically designed for the rigorous conditions a diesel engine is subjected to.

Many synthetic fluid manufacturers advertise extended oil drain intervals when using their products. However, we believe there is no substitution for the OEM recommended drain intervals unless an oil analysis is being performed through the service life of the fluid and reveals that the oil condition remains suitable (oil composition has not been broken down or changed). Oil analyses are not uncommon, especially on heavy machinery where the sheer quantity of oil required makes it inherently expensive to service. Regardless, we cannot endorse individual manufacturer's claims and stress the importance of following the OEM recommended service intervals.

Synthetic oil is too "slick" and provides less protection than convention oils - By "slick", we assume their referring to the coefficient of friction between the oil and wear surfaces. Synthetic oils reduce friction, which is beneficial to any engine. The notion that there is such a thing as "too little" friction is completely false. Less friction translates to less heat and wear. The important thing is stick with the OEM recommended viscosity.

Once you switch to synthetic oil, you can't go back to conventional - Again, synthetic and conventional oils are compatible. You can switch between the two as you please with no concerns.

One of the most recognizable names in synthetic motor and gear oils is Amsoil. It is nearly impossible to find a motorsports event in which a participant is not using Amsoil. And while Amsoil may be popular on the track, the company offers a number of products for the average driver who wants added protection and performance from their vehicle, including a line of products specifically developed for the hard working diesel engine. Here's a few Amsoil products that have become standard in our shop. 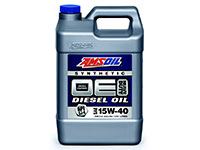 Amsoil's "OE" series is a great entry level motor oil at an affordable price. The product meets API CJ-4 specifications and is therefore compatible with modern and older engines. It has all the same benefits of more expensive products, save the promise of extended oil drain intervals. 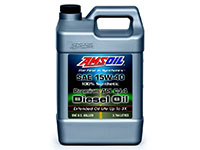 "Premium" series synthetic diesel motor oil is specifically tailored for engines that require API CJ-4 specification. This is the oil of choice for modern, low emission diesel engines. We've found the 7.3L and 6.0L Power Stroke engine's HEUI injection system responds well to this oil, although it's a great choice for newer Duramax, Cummins, and Power Stroke equipped pickups. If you tow frequently, this is Amsoil's maximum level of protection. 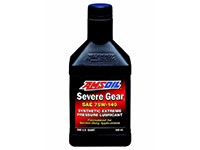 Differentials create a lot of heat, and even more when towing. For that reason alone, a synthetic gear oil is the perfect choice in order to protect your gear train. Severe gear is available in a variety of weights and has a greater resistance to thermal break down. 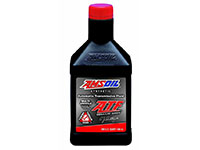 Amsoil's Signature series synthetic ATF is a spec'd as a multi-vehicle application, but we can't recommend it in most automatic transmissions. The truth of the matter is that modern automatic transmissions are sensitive to fluid spec. However, we've found this to work excellent in manual transmissions and transfer cases that call for an ATF. For example, we've experienced smoother shifting and engagements in the ZF 5 speed manual trans and several BorgWarner chain driven transfer cases.