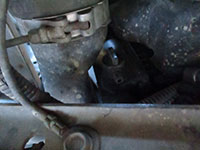 • Disconnect both negative battery cables so that the engine cannot be started.

• Locate the radiator drain valve/petcock on the driver side, bottom corner of the radiator. 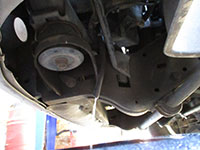 • If applicable, attach a section of 5/16" hose (fuel line or heater hose) to the radiator drain valve. Some radiators have a nipple at the bottom of the valve (as pictured) while others drain out of the valve stem itself. 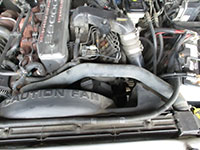 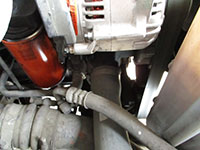 • Remove the lower radiator hose (connects passenger side engine block below the alternator to lower portion of radiator). Note that a significant amount of coolant will drain from the engine when the hose is removed; position a drain pan accordingly. 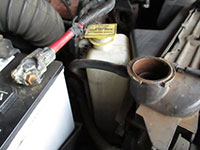 • Remove the small heater hose connecting the radiator to the overflow tank. 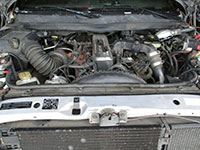 • The positive battery cable connecting the left and right batteries is secured to the radiator by a series of clamps. Remove the clamps from the radiator studs with a 10 mm socket, then lay the battery cable forward over the engine so that it is out of the way.

• Remove the small metal clips connecting the top of the fan shroud to the radiator using a small screwdriver.

• Remove the windshield wiper fluid reservoir. There are two small electrical connectors and a single hose at the bottom of the tank that must be removed first. The reservoir is secured to the fan shroud in a similar fashion as the overflow tank. Pry the reservoir away from the fan shroud slightly while pulling upwards to remove. 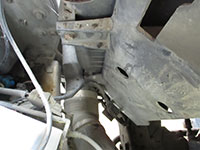 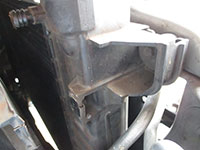 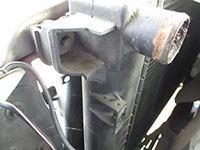 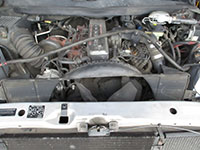 • Slide the radiator straight upwards to remove from vehicle. The radiator may be holding residual engine coolant, so do not tilt it until it is removed from the vehicle and positioned over a drain pan.