[1] Fits any door, front and rear.
[2] Hinged plastic retainer that connects the exterior door handle rod to the door latch assembly; most common and easiest to break during disassembly.
[3 ]Kit contains 3 common retainer clips including a Dorman replacement for the door handle rod retainer clip listed above.

Note that the following procedures depict replacing the door ajar switch on a front door. The process is identical for the rear doors of a Crew Cab model, however the door latch assembly is somewhat more difficult to access. 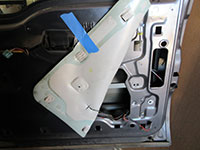 • Carefully peel back the protective sound barrier/insulation and tape it out of the way to gain access to the openings in the door frame (note - it is extremely sticky, but robust). 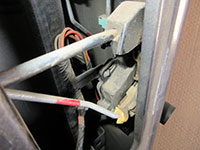 • Locate the door latch mechanism. The mechanism for doors with automatic locks is slightly larger and more complicated than those with manual locks, but the removal and reinstallation process is similar for both applications.

• Locate the manual door lock lever at the bottom of the actuator (identified in fullsize image). Lift the yellow retaining clip upwards to unlock (it will rotate/pivot clockwise), then pull the rod towards the interior of the door to remove from its slot. 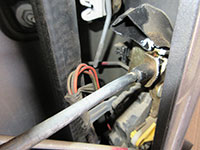 • Locate the interior door lever cable (identified in fullsize image). Remove the rubber dust boot from the cable linkage assembly. Press the actuating link/lever at the bottom of the apparatus to allow the cable itself to slack. Remove the cable by prying the rubber portion out of its socket, then maneuvering the ball end out of the linkage. 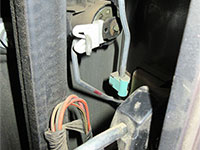 • Locate the exterior key lock mechanism (identified in fullsize image). Using a pair of screwdrivers or similar tool, relieve the fingers of the plastic clip and remove the rod; let it hang freely from the door latch mechanism.

• Locate the exterior door handle rod (identified in fullsize image). Open the hinge on the plastic clip, then remove the rod from the clip. 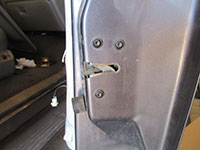 • Carefully maneuver the door lock mechanism to the opening in the door and disconnect the electrical connector for the door ajar switch and electric door lock actuator (if applicable).

• Maneuver the door lock mechanism out through the large opening in the door. 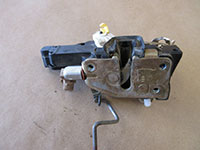 • Remove and replace the door ajar switch by rotating it 1/2 turn until it releases from the door latch assembly.