Before replacing the glow plugs verify that the problem is not related to a glow plug relay or high pressure oil problem. A glow plug relay that chatters (clicks on and off rapidly) should be replaced. Likewise, if you do not audibly detect the glow plug relay engaging when the key is turned to the "run" position (initiating glow plug preheat cycle), the glow plugs are not receiving power; the relay makes a distinct clicking sound when it is energized. White smoke being emitted out of the tailpipe during cranking may indicate a glow plug related problem as the engine is receiving fuel but there is a lack of heat to initiate auto-ignition. For a hard start/no start condition with no smoke, verify that the ICP and IPR valve are functioning properly. The system requires a minimum ~ 500 psi of oil pressure in order to fire an injector.

We highly recommend that you use genuine Motorcraft ZD-11 (Ford p/n F4TZ-12A342-BA) glow plugs. Aftermarket glow plugs have garnered a history of failure and/or a significantly shorter life than the OEM units. Concerns with aftermarket glow plugs include the tips swelling and breaking off in the cylinder during removal. Additionally, replace all 8 glow plugs at once - they are not terribly expensive. While the valve covers are removed, it is wise to re-torque the rocker arm pedestals and injector hold-down bolts, both of which have a tendency to loosen over time. 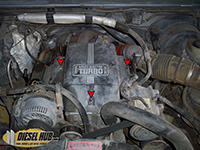 • Use compressed air or a vacuum cleaner to remove any dust or debris around the valve covers so that it does not find its way into the top of the cylinder head when the cover is removed. 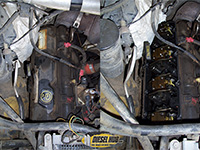 • Remove the dipstick tube bracket, which is held in place by two studs (1/2" hex head). 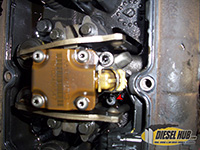 • With the valve cover removed, locate the glow plugs. There is a glow plug next to each fuel injector, which will have a small red or black wire going into an electrical connector that is seated at the top of the glow plug (see picture for clarification). 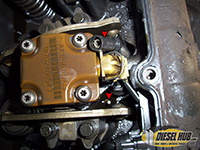 • Remove the electrical connector from the top of the glow plug and carefully move it out of the way. A pair of needle nose pliers is useful for slipping off the connector.

• Use a clean rag to gently dab the engine oil around the glow plug. This will minimize the amount of oil that seeps into the cylinder when the glow plug is removed.

• Use a 1/4" drive, 10 mm deep socket with a small extension to loosen the glow plug. You will not be able to completely remove the glow plug, as the socket will hang up on the rocker arm (if you loosen too far and can not remove your socket, simply tighten the glow plug until you can remove it). 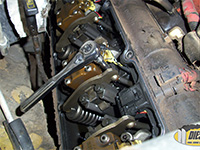 • Once you have loosened the glow plug, slip a 6" section of 1/4" fuel/vacuum hose over the exposed tip of the glow plug. Use this to loosen the glow plug completely and remove it.

• If your hose just spins on the glow plug and is unsuccessful at removing it, then you did not loosen it enough with your socket. Attempt to loosen the glow plug as much as possible with the socket while still being able to remove it without hitting the rocker arm.
• IMPORTANT: Be extremely careful not to drop any tools into the rocker arm journals, as it will be extremely difficult to attempt to fish them out.

• With the old glow plug removed, installation of the new one is reverse. Slip the new glow plug into your 1/4" hose and start to tighten it by hand, then finish using a 10 mm socket. 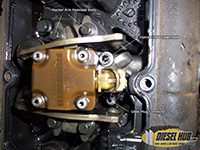 • Torque glow plugs to 124 in-lbs (14 N-m) and then reinstall the electrical connector, making sure it seats properly.

• Replace one glow plug at a time and work front-to-back (or back-to-front) so that you can keep track of which ones have been replaced.

• Reinstall the valve cover, torquing the bolts to 97 in-lb (11 N-m) in an alternating pattern, then reinstall the dipstick tube bracket and clamp. 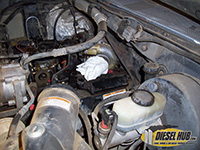 • Remove the tubing between the turbocharger and air filter box, followed by the bracket for the engine cover. Place a clean rag in the turbocharger so that debris does not find its way into the compressor housing. 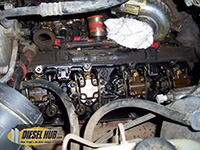 • Procedures for the driver side is identical to that of the passenger side - loosen the old glow plug with a 10 mm deep socket, remove with 1/4" fuel/vacuum hose, and install new one in reverse order.

• TIP: Use an inspection mirror and flashlight to ensure that the electrical connectors are properly installed on the glow plugs closest to the firewall, as it is easy to wedge the connector between the push rod and glow plug, giving the false sense that the connector is seated when it is indeed not..