The exhaust backpressure valve is a simple device designed to reduce the time required for an engine to reach operating temperature by restricting exhaust flow and essentially simulating a load on the engine. The valve itself is a simple butterfly type that is mounted to the turbine outlet of the turbocharger. The EBPV is connected to the EBPV actuator by means of a simple linkage. The actuator features a plunger/piston that moves forwards and backwards to control the position of the EBPV. A EBPV regulator/solenoid controls the flow of engine oil into the actuator, which in turn controls its range of motion. The EBP sensor located at the front of the HPOP reservoir is used to identify the correct position of the EBPV during the warm up process. Once the engine approaches operating temperature, the system is disabled and the EBP valve is stored in the open position.

One could argue that this system was developed with the intent of reducing emissions since a diesel engine does not reach peak combustion efficiency until it reaches operating temperature. A subsequent benefit of reduced warm up times is less fuel dilution, as a cold engine at idle is by far one of the most profound conditions in which fuel dilution occurs. Regardless, it is a restriction in the path of the exhaust stream exiting the turbine housing and therefore imposes a negative effect on engine performance and turbocharger efficiency. There are many reasons why some choose to delete the EBPV, including:

• The EBPV regulator and actuator are prone to leaking engine oil at the rear of the turbocharger; they are not easily accessible and only serviceable with the turbocharger removed.

The two negatives regarding deleting or disabling the EBPV are 1) the engine will require more time to reach operating temperature. This is not a major concern in areas with warmer climates, however this could have negative impacts on engines that are started in extremely cold environments where fuel dilution is already major concern. 2) the engine will produce greater emissions relative to the difference in time necessary for an engine to reach operating temperature with the EBPV vs without it. This is unlikely a serious issue for most, however the EBPV is an emissions control device and thus it is required to be fully functional during emission tests in regions where they are required.

The "correct", or might I suggest "most thorough" method of deleting the EBPV is to purchase a non-EBPV turbocharger pedestal and a non-EBPV turbine outlet. Both of these are manufactured by Garrett, the OEM turbocharger manufacturer for all 7.3L Power Stroke diesels. The part numbers for these components are as follows:

A second, and very inexpensive option is to simply remove the valve, gut it, and disconnect the EBP regulator. Remove the butterfly valve, plug the holes with freeze plugs or a similar piece of common hardware, and reinstall it. Disconnecting the regulator keeps the piston on the actuator in the retracted position. The problems with this method are that 1) it will throw a soft DTC and 2) the actuator and regulator can still develop an oil leak in time. Simply unplugging the EBPV in order to hinder its operation negates to achieve the obvious benefits from removing the restriction and therefore is a useless approach.

A third option is to remove the EBPV (instructions below) and replace it with a non-EBPV turbine outlet while keeping the factory EBPV turbocharger pedestal. This option eliminates the restriction, however it reduces the cost by avoiding the expense of purchasing a new turbo pedestal and all the items required to reinstall the turbocharger. Once again, the actuator and regulator could possibly leak in the future.

To disable the EBPV electronically without deleting any of the pedestal components, you can simply unplug the two prong connector mounted on the compressor housing near the compressor inlet. However, the PCM will realize that the system is not functioning and trigger a DTC. Our 7.3L Power Stroke EBPV connector plug will solve this problem, or you can jump the two prong connector on the harness side with a 470 Ω, 1 Watt resistor and tape/heat shrink it securely. The PCM will read that the EBPV system is functioning properly even though the connector is unplugged. 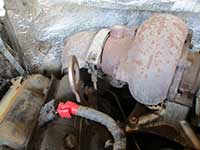 • Remove the exhaust downpipe and tuck it downwards between the engine and firewall as much as possible. 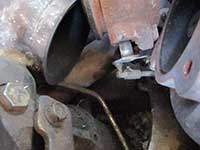 • Disconnect the actuator linkage from the EBPV by sliding the latch/sleeve on the rod towards the actuator (driver side), then pulling downwards. 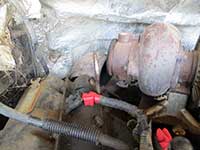 • Remove the three bolts connecting the EBPV to the turbocharger turbine housing using an 8 mm 12 point socket. These bolts will be tight and you may want to hit them with a penetrating fluid (PB Blaster, WD-40, etc) before attempting to loosen them. 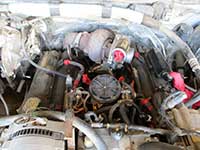 • The EBPV regulator electrical connector is located just below the compressor inlet at the front of the turbocharger (refer to image).

• Installation of the various EBPV delete techniques/products is reverse of removal. 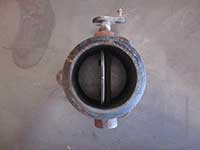 • With the EBPV placed on a bench in the "open" position, the residual exhaust restriction is clearly visible.