The oil pressure switch is generally only a problem on 1995 and older model year engines, as the OPS of later model year engines is not responsible for switching on the lift pump. This is not to say that an oil pressure sensor cannot fail on 1996+ engines, however the symptoms may differ considerably. For 1995 and older engines, the problem with the OPS is that it must carry the electrical load of the lift pump, for which it arguably lacks a sufficient switch design to do so. One could argue that the system does indeed work, even it its lifespan is short and the switch is unreliable. We can only assume that the engineers had the best of intentions, even if their approach fell short. After all, they did modify the design for the 1996 model year.

A lift pump is often blamed for symptoms that are actually caused by a failed/failing oil pressure switch, which can cause stalling and intermittent driveability issues. The OPS can be tested using a multimeter by unplugging the lift pump and reading the voltage across the connector pins while cranking the engine over (pre-1996 model year engines) or turning the key to the "run" position (1996 and newer model years). Do not crawl under a vehicle when the engine is being cranked over. Remove the lift pump connector and use jumper/extension wires and a digital multimeter or voltmeter to read the voltage from a safe location. If no voltage is being supplied to the lift pump while cranking the engine, replace the OPS. If the lift pump is receiving power, continue to hunt for your problem.

The oil pressure sensor is located in one of two positions depending on the model year of the engine. 1995 MY and early engines will have the OPS mounted behind/beneath the glow plug controller and into a fitting in the driver side cylinder head. 1996 MY and later engines will have the OPS located behind/beneath the rear intake manifold runner to the driver side of the fuel filter manager (FFM).

Removal of the oil pressure sensor/switch is intended to be performed with a special socket that features a minimum 2-5/8" usable depth - this is much greater than the inside depth of a typical deep socket. The socket size is 1-1/16" and a 6 point socket must be used; a 12 point socket/wrench will slip on the OPS. The nut may be appear to be a typical 6 point hex head, but the corners are in fact rounded and a 12 point socket will therefore not suffice. A crowfoot is an acceptable alternative and may provide more flexible access for 1996 and later model year engines as the OPS is located in an awkward position somewhat beneath an intake manifold runner.

Acceptable sockets include Lisle 13250, Snap-On A120, Kent-Moore J-41712, and many generic sensor sockets available at your local auto parts franchise. Note that OTC offers multiple sensor sockets, none of which are deep enough for this oil pressure sensor. At time of publishing, the Lisle socket cost less than $10 USD and worked flawlessly; the Snap-On and Kent-Moore sockets come with a steep price tag.

The following procedures are specific to pre-1996 model year engines. The procedures are very similar for later model years, however the location and orientation of the sensor is different. 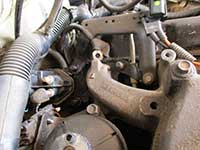 • Remove the glow plug controller, located on a bracket at the rear of the driver side cylinder head. The (2) terminal wire lugs require a 1/2" or 13mm socket, while you'll need to remove (3) hex head nuts with a 15mm socket to free the mounts and bracket.

• With the glow plug controller free, rotate it 180 degrees to access the connector retaining clip. 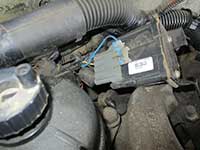 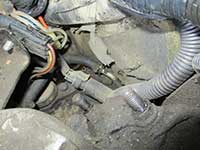 • With the glow plug controller removed, the oil pressure sensor/switch is visible. Remove the connector from the top of the OPS. 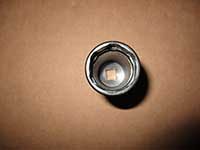 • As previously mentioned, a special socket is recommended for removing the oil pressure sensor. The socket must have a minimum 2-5/8" depth, which is more than an average deep well socket. It must also be a 6 point socket; a 12 point socket/wrench will not grab the nuts rounded corners. The specific tool a has rounded as opposed to sharp corners, which matches the shape of the sensor. 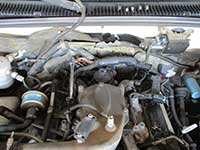 • It is convenient to use a long extension or series of extensions to reach the oil pressure sensor topside, as pictured.

• Remove the oil pressure sensor and install the replacement in its place. 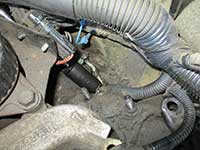 • Cinch the sensor down snug, but there is no need to overtighten.

• Reinstall the oil pressure sensor connector. Replace the connector if it is damaged, will not lock, or is otherwise compromised (see ACDelco PT-121, OPS pigtail).

• Reinstall the glow plug controller. A touch of dielectric grease may be applied to the connector terminals and wire lugs prior to installation.

• Start the engine and verify proper operation of the oil pressure sensor/switch.

Tired of repeated oil pressure switch failures? Take a look at our OPS bypass fuel pump harness, which significantly reduces the electrical load through the OPS for more reliable operation.