The fuel system on the 6.5L GM diesel is simple and straight forward. A low pressure fuel pump (lift pump) mounted on the driver side framerail draws fuel from the tank, pushes it through the fuel filter housing, and then into the injection pump. The injection pump, which may be entirely mechanical or electronically controlled depending on model year, provides high pressure fuel to each individual injector at the time in which an injection event is desired.

There are 3 filters within the fuel system - a straining "sock" on the inlet of the in-tank sending unit (sending unit includes float/switch for the fuel level gauge, outlet line to lift pump, and return line), the primary fuel filter located within the Fuel Filter Manager ("FFM", trademark for the Stanadyne fuel filter housing found on these engines), and finally a small plastic strainer (Stanadyne/Clarcor part number 29244) that is the last line of defense in keeping large debris/particles from reaching the injection pump in the event of a fuel filter failure. Both the in-tank strainer and primary fuel filter can cause severe fuel pressure problems when they become clogged. The strainer in the FFM will only become clogged should the fuel filter itself fail/deteriorate. All 3 filters/strainers should be in good, clean condition for maximum fuel economy and a quick starting, smooth running engine.

A 6.5 diesel can and will run with a weak or even failed lift pump. As a result, the fuel pump should not necessarily be the first suspect in diagnosing no start conditions. The telltale of a lift pump failure (or weak pump) is a bucking or jerking condition under load (usually acceleration), which indicates the injection pump is starving for fuel. The following steps will help troubleshoot all 6.5L diesel fuel system problems and narrow down the culprit. The procedures are slightly different for pre-1996 and 1996+ model year engines, primarily because pre-1996 engines must have oil pressure for the lift pump to receive power. 1996 and newer model year engines begin to cycle the lift pump as soon as the key is turned to the "run" position (i.e. the glow plug preheat is initiated).

If there is considerable visible smoke (white or black) while cranking the engine, you are highly unlikely to be experiencing a lift pump related problem. If this is a fuel system related problem, it's likely low fuel pressure from the injection pump (but obviously plenty of fuel flow to the IP) or one or more bad fuel injectors. White smoke is generally indicative of a glow plug related issue. See 6.2L and 6.5L diesel glow plug system troubleshooting guide.

1) Will the engine start?

No - Continue to step 4. If the fuel pump connector (chassis side) has 12 volts, verify that the fuel pump is not working by connecting it directly to a 12 volt power source (black wire to ground, brown wire to 12v+). This is unlikely a fuel pump issue even if it has failed, suspect PMD (engine should run with failed lift pump, may try bleeding air from fuel system).

Yes - If fuel pressure is within spec but the engine is stalling, running rough, or is hard to start than the problem is likely in another part of the fuel system (suspect injection pump). If there is a no start condition or no start/hard start when engine is HOT only, the FSD/PMD is likely the root cause. By process of elimination, the problem is not with the fuel pump or any fuel filter/line restrictions.

Yes - Attach a section of fuel line to the fuel bleed/test port on the thermostat housing. Place the other end of the hose in a container suitable for catching fuel. With the engine running crack open the fuel bleed valve - the engine should stutter/stall and there should be no fuel flow. Continue to step 3. If you have fuel flow, you should have fuel pressure, even if it is low; revisit step 2.

No - If the engine had low fuel pressure, continue to step 4.

Yes - If the lift pump is receiving power but not building pressure, it has certainly failed. Replace the fuel pump, then repeat these procedures to ensure there are no further fuel system related problems. You may also verify that the fuel pump is not running by connecting it directly to a 12 volt power source (black wire to ground, brown wire to 12v+)

No - The oil pressure switch (applicable to 1995 and later engines only) has likely failed. This is extremely common and explains why the lift pump is not receiving power. Additional causes could be a fuse/relay failure or damaged wire (especially on 1996+ models). Replace the OPS and continue at step 2 to verify the problem has been solved.

5) Check the condition of the fuel filter. Was it dark brown/black in color or otherwise appear dirty?

Yes - Replace the fuel filter and repeat step 2. If fuel pressure is within spec following the fuel filter replacement, it was restricting fuel flow. If the fuel pressure does not improve, the remaining suspects are a weak fuel pump, plugged in-tank sending unit strainer, or other fuel line restriction. Recommend replacing fuel pump and testing pressure once more. If problems persist drop and clean the fuel tank, replace the sending unit strainer (sock), and blow out fuel lines with compressed air.

No - The lift pump is likely weak and this not building full pressure. Recommend replacing the fuel pump and repeating the fuel pressure test. If problems persist drop and clean the fuel tank, replace the sending unit strainer (sock), and blow out fuel lines with compressed air.

How to Test the Fuel Pressure on a 6.5L GM Diesel 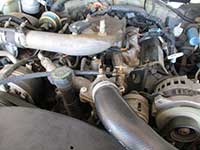 • Locate the T-handle drain/bleed valve positioned directly behind the thermostat housing. The valve should have a section of hose attached to it from the factory, which is typically tucked into the engine valley. If there is no hose, attach a section of 1/4" fuel line.

• Place the end of the hose in a fuel safe container and start the engine. Open the drain/bleed valve ~1/4 turn (the valve does not need to be opened completely and is likely to leak if opened more than necessary). 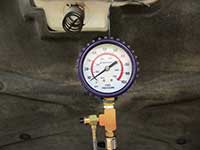 • Install a fuel pressure gauge to the drain/bleed valve hose.

• Start the engine, then crack open the drain/bleed valve and read the fuel pressure. Fuel pressure should read between 3 and 7 psi at idle. Anything lower than 3 psi may indicate that the lift pump is not performing properly and should be replaced.

• If fuel pressure is within spec, the problem you're experiencing is not likely the lift pump.