Turbo surge, characterized by a distinct "bark" or fluttering noise coming from the turbocharger, occurs do to a rapid drop in engine load. It is therefore generally experienced when abruptly releasing the accelerator pedal during a high load situation, such as merging onto the freeway or accelerating rapidly. Under such conditions, manifold pressure is relatively high and the abrupt change in load rapidly slows the turbocharger, which no longer has a high volume supply of exhaust gas to the turbine. The compressor is therefore no long building or maintaining boost, but has a high pressure column of air in front of the compressor outlet. Since the turbocharger is no longer pushing the air, airflow reverses direction as it finds the path of least resistance. This causes the compressor wheel to "surge", or speed up and slow down rapidly, producing the distinct sound. After the compressor outlet and intake manifold pressures return to an equilibrium state, the sound subsides and the surge event ends (typically 2 - 3 seconds).

Turbo surge is not ideal; under average conditions, the compressor wheel is forced to accelerate and decelerate rapidly, placing a relatively high torsional force on the turbo shaft. In extreme cases, a compressor can rapidly stall, accelerate, and repeat this cycle several times during a surge event. In addition to turbocharger shaft failures, continuous turbo surge events can lead to premature bearing failure. For these reasons, turbo surge is not ideal and should be quickly addressed. An aftermarket compressor wheel is one answer to frequent compressor surge/stall conditions. The other is to refrain from abruptly releasing the accelerator pedal.

The "Wicked Wheel", sometimes also referred to as the "Whislin' Wheel" or "anti-surge wheel", is nothing more than a factory 1994 - 1999 model year compressor wheel. The item is produced by BorgWarner (part number 170293) and marketed/sold by a number of aftermarket diesel performance brands, including Banks Power. 1994 - 1999 Garrett TP38 turbochargers were assembled with this compressor wheel. 1999.5 - 2003 model year engines with the GTP38 turbocharger received an alternative compressor that has a tendency to surge in the presence of performance modifications. This Wicked Wheel is therefore an upgrade for 1999.5 - 2003 model year engines. In addition to being an anti-surge compressor wheel, turbocharger spooling characteristics are typically improved with the earlier compressor design.

Note - Wicked Wheel is also a trademark of one manufacturer whom produces billet compressor wheels marketed under this name. These are not to be confused with the original factory "Wicked Wheel" upgrade for the 7.3L Power Stroke diesel, where the name originated.

Billet compressors are cost effective to produce in low production manufacturing. Additionally, alterations to a compressor wheel design can be developed and implemented without the need to acquire expensive casting equipment. This versatility contributes to the reason why billet wheels are a commonality in the aftermarket. While most OE manufacturers produce cast compressor wheels, there are exceptions.

Where the billet compressor outshines the cast compressor is in its resilience in high boost applications, as the machined compressor displays superior resistance to fatigue related failures. Fatigue is an important consideration in applications where turbochargers are continuously cycling from high to low RPMs, particularly at high boost pressures. One could also argue that the machined compressor is more resilient to centrifugal forces acting on it at high speeds, however cast compressor wheels do not "under perform" when subjected under high centrifugal stresses.

For a combination of these reasons, billet compressor wheels are the aftermarket industry standard and recommended in high performance applications. In stock to mild built engines, a billet wheel provides little benefit in terms of strength, although you'll still have access to superior blade/fin designs that may reduce turbocharger spool times, increase boost potential, and provide greater airflow to match fuel system related upgrades.

How to Change the Compressor Wheel on a 7.3L Power Stroke Diesel 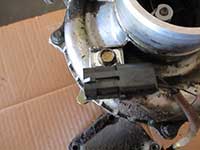 • Remove turbocharger from the engine. 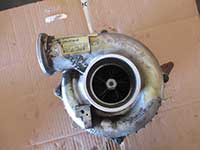 • Remove the compressor housing using an 8 mm, 12 point socket (must be 12 point). There are 4 bolts total.

Depending on the model year of the engine, the backing plate may be sealed to the housing using silicon. These are more difficult to remove and require patience. 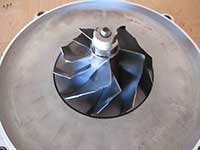 • Thoroughly clean the mounting flanges of the compressor housing and backing plate. Remove any silicon/o-ring remnants so that there is a positive seal during reassembly.

• Remove the compressor wheel by holding the turbine wheel with an 18 mm socket and unthreading the compressor with a 16 mm socket. It is standard right hand thread, rotate counterclockwise to remove. 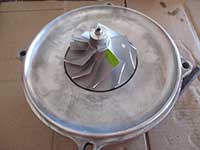 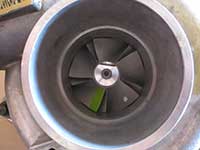 • Verify that the compressor wheel spins freely in the housing, then reinstall the turbocharger.