Bleeding the fuel system is slightly different for 1992 to 1995 models and the later 1996+ model years do to differences in how the fuel pump (lift pump) is wired.

On later 6.5L diesels, model year 1996 and newer, the fuel pump is powered on as soon as the key is turned to the "RUN" position (glow plug preheat sequence begins). The engine does not have to be cranking nor running for the fuel pump to operate. The system is much simpler and more reliable than the previous design as it does not rely on the oil pressure switch to carry the load of the lift pump.

The location of the bleed port, fuel filter housing, and fuel pump (lift pump) are identical for all model years. The procedures for bleeding the fuel system are also identical with the exception of how the fuel pump is cycled while purging air from the system; pre-1996 engines must be cranked while the key just needs to be turned to the "RUN" position for 1996 and later engines. 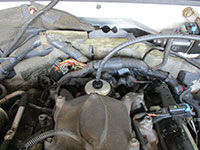 • Attach a section of 5/16" fuel line to the bleed valve orifice located on the top of the fuel filter cannister. Place the opposite end in a suitable fuel safe container. Ensure that the hose is safely positioned such that it will not contact any moving engine component(s) when the engine is cranked and/or started.

• Open the bleed orifice slightly by rotating it counterclockwise roughly 1/2 a turn.

1996 + model year engines - Cycle the key to the "RUN" position until the lift pump stops cycling (you will hear a distinct chattering noise coming from the pump while it is running). Once the pump shuts off, turn the key to the "OFF" position, then back to the "RUN" position once more so that the fuel pump cycles again. Continue this process until a steady stream of fuel comes out of the line and into your container. Once you have a steady stream, completely close the bleed orifice on the filter housing and remove the hose.

1992 - 1995 model year engines - As previously discussed, the fuel pump will not cycle unless there is oil pressure so the engine must be cranking for the pump to run. With the bleed orifice on the fuel filter open, crank the engine over for no more than 10 seconds, then position the key to the "OFF" position and allow the starter to cool for 60 seconds. When not cranking the engine, close the bleed orifice to prevent air from being reintroduced to the system (this task is best done with two people). Repeat this process until a steady stream of fuel flows out of the fuel line, then close the bleed orifice and remove the hose.

Note - do not neglect to allow the starter to cool between cranking cycles. It is not uncommon for the engine to start running after 1 to 2 bleed cycles. Likewise, some engines may take several attempts in order to bleed the fuel lines completely. If the engine starts, you may let it run until all air is bled from the fuel system, then close the bleed valve. Be extremely cautious to keep your appendages away from all moving parts when working on a running engine. 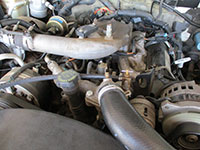 • Once air has been completely bled from the fuel filter housing, attach a section of hose to the bleed valve mounted to the driver side of the thermostat housing (T-handle brass valve). Place the opposite end of the hose in a fuel safe container.

If the engine will run, start the engine and bleed any remaining air from the system by slightly opening the T-handle bleed valve until a steady stream of fuel flows out of the hose. Close the valve once this is achieved.

Note - if the engine runs rough, stutters, or stalls when the T-handle bleed valve is opened (indicating suction instead of fuel flow), the fuel pump is weak, failed, and/or there is a fuel restriction (fuel filter, plugged line, and/or clogged in-tank fuel strainer). 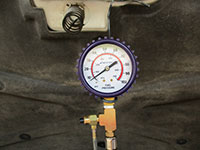 • If the engine will not run, crank the engine (pre-1996 model years) or cycle the key to the "RUN" position (1996+ model years) as described in the previous procedures until a steady stream of fuel flows out of the hose, then close the valve.

• If the engine runs rough, repeat this procedures until all air is bled from the fuel system.

• Once the engine is running, check the fuel pressure to ensure the system is operating within spec. See: 6.5L diesel fuel pressure test procedures for more information.