The 6.5L diesel utilizes a combination oil pressure sensor/switch, typically shorthanded as the “OPS”. Inside the OPS, a small armature carries the electrical load of the frame mounted fuel (lift) pump. While the fuel pump load is relatively small (on the order of 4 amps), the frequency of OPS failures proves repeatedly that the OPS switching mechanism falls short of meeting the electrical demands of the fuel pump. Some experts suggest that the OPS is rated to manage a 1/4 of the fuel pump’s normal electrical load. While these claims are really only substantiated by circumstantial data, most can agree that the system's reliability leaves little to be desired.

In the event of an OPS failure, the fuel pump will cease to function, but most engines will still start and run without pressure from the lift pump because the high pressure injection pump can draw enough fuel from the fuel tank to operate at low loads. However, it is ill-advised to operate an engine without proper fuel pressure since this places substantial strain on the injection pump that may cause premature wear and/or irreversible damage. Another drawback of the factory fuel pump wiring is that the lift pump is powered by relatively small 18 gauge wires, which one could argue is narrowly sufficient under ideal conditions. As the OPS ages and the resistance through the switching mechanism increases, the entire system struggles to maintain adequate voltage to the lift pump, hindering its performance and ultimately leading to premature failure.

One solution is not to bypass the OPS altogether, as it does serve an important role as a safety device, but rather to reduce the electrical load across it by modifying the circuit so that the fuel pump is run off a more reliable, high current relay. By using the OPS to activate a relay coil instead of the fuel pump itself, current draw through the OPS is reduced from ~4 amps to ~150 milliamps (0.15 amps). Our fuel pump relay/OPS bypass harness does just this. It also powers the fuel pump through hefty 12 AWG wires, versus the factory 18 AWG setup, for improved and more consistent voltage supply to the fuel pump.

With this upgrade, owners typically experience:

On a 6.5L diesel, fuel pressure and flow are critical to the health of the entire system; poor fuel supply to the injection pump will negatively impact its service life. The following data was collected from a 1995 model year 6.5L turbodiesel equipped C3500, which previously suffered from repeated OPS and fuel pump failures.

DISCLAIMER - results will vary; vehicle mileage, condition, and other factors have a significant impact on engine performance and starting characteristics. Listed data is the average of 3 test cycles. The fuel pump, fuel filter, fuel tank sock, and oil pressure sensor/switch were replaced prior to collecting this data. 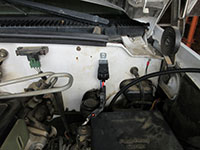 • Locate a suitable location to mount the relay assembly on the driver’s side of the firewall in the vicinity of the underhood fuse box.

• Mount the relay assembly using the supplied self-tapping sheet metal screw; a pilot hole is not necessary, but may be used if desired. 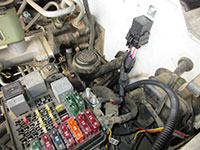 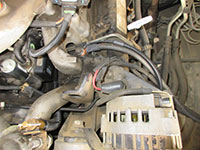 • Attach the fuel pump ground wire (black wire w/ ring terminal) to a GOOD engine ground or the negative battery post. 6.5L diesels have a large grounding lug behind the alternator next to an intake manifold runner (pictured); this is a reliable ground and we recommend utilizing it for this installation. The included stainless steel washer can be used as a spacer between the main engine ground lug and the fuel pump ground terminal if desired. 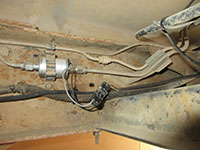 • Carefully route the remainder of the harness down the firewall and along the driver side frame rail. 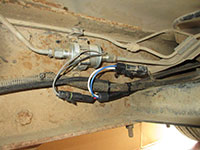 • Mate the male connector (w/ blue and white wires) with the chassis connector.

• Verify that all wires are routed safely and appropriately with no obvious chafe points, then use the supplied cable ties to secure the harness.