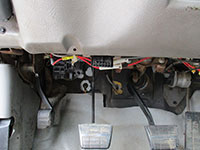 The OBD I connector is located beneath the dash and just left of the steering column. For reference, it is almost directly above the clutch pedal on trucks equipped with a manual transmission (click image at left to view fullsize). As previously mentioned, these procedures are applicable to pre-1996 model year trucks equipped with the 6.5L GM/Detroit diesel. 1996 and later model year trucks will feature an OBD II system, which is completely different and more sophisticated than the earlier diagnostics feature. There are several code readers that will read the DTCs stored in an OBD I system, however they can also be read without the need for special equipment. Refer to the connector pinout diagram and procedures below in order to read any stored DTCs from your 1992 through 1995 6.5L diesel.

1) With the ignition switch in the "OFF" position, jump (connect) the "A" and "B" terminals - a small length of 14-16 AWG solid core wire stripped at both ends seems to work well, but there are obviously many methods for accomplishing this.

2) Switch the ignition switch to the "RUN" position, which will initiate the glow plug preheat sequence.

3) Monitor the "Service Engine Soon" light, which will indicate any and all stored DTCs. DTCs are displayed in a manner reminiscent of Morse Code, using the SES light as an indicator and a combination of long and short pauses between illuminations. To read a DTC, count the number of times the SES light flashes with only short pauses between each flash, then repeat after the following long pause. A long pause will always indicate that the sequence has moved on to the second number or to the next DTC. To avoid confusion, there are NO codes that have a zero in the number. For example:

(let "-" denote the length of the pause between SES light flashes)

4) All stored DTCs can be cleared by simultaneously depressing the accelerator and brake pedals while the code reading sequence is taking place (i.e. A & B terminals jumped, key in the "RUN" position). Codes are not cleared immediately, but will be cleared when the current diagnostic session has been terminated. DTC 12 is never removed and will be displayed at the beginning of each diagnostic session and in between DTC display sequences.